The Chinese seal artist Ba Weizu was born in Xi county, Anhui province, China (a native of Xixian). He was Influenced by Han and Qin Dynasty seals and by the seal artists Wang Guan and Lin Gao.

He came from a wealthy salt merchant family and was a civil service official. He compiled his seals into the book Carved Reproductions of Si Xiang Studio. Ba Weizu is considered one of the “Four scholars of the Xi School.” 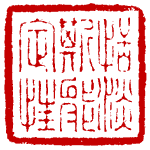