The Chinese seal artist Hu Zhengyan was born in Xinan in Xiuning County, Anhui Province but lived most of his life in Nanjing. He was a student of He Zhen.

His wikipedia entry says “he worked in calligraphy, traditional Chinese painting, and seal carving, but was primarily a publisher, producing academic texts as well as records of his own work. He was best known for his manual of painting entitled The Ten Bamboo Studio Manual of Painting and Calligraphy (Shizhuzhai Shuhuapu). Hu Zhengyan was a noted exponent of seal-caving, producing personal seals for numerous contemporary dignitaries, as well as the Huangguang Emperor. His style was rooted in the classical seal script of the Han Dynasty, and he followed the Huizhou (Xingyuang) school of carving founded by He Zhen. Huizhou seals attempt to impart an ancient, weathered impression, although unlike other Huizhou artists Hu did not make a regular practice of artificially aging his seals. In 1644, Zhengyan took it upon himself to create a new imperial seal for the Hongguang Emperor, which he carved after a period of fasting and prayer. He presented his creation with an essay, the Great exhortation of the seal, in which he bemoaned the loss of the Chongzhen Emperor’s seal and begged Heaven’s favor in restoring it. Hu was concerned that his essay would be overlooked because he had not written it in the form of rhyming, equally-footed couplets used in the Imperial examinations, but his submission and the seal itself were nevertheless both accepted by the Southern Ming court.”

For more on Hu see the complete wikipedia entry: http://en.wikipedia.org/wiki/Hu_Zhengyan 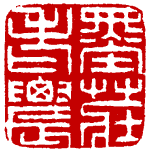