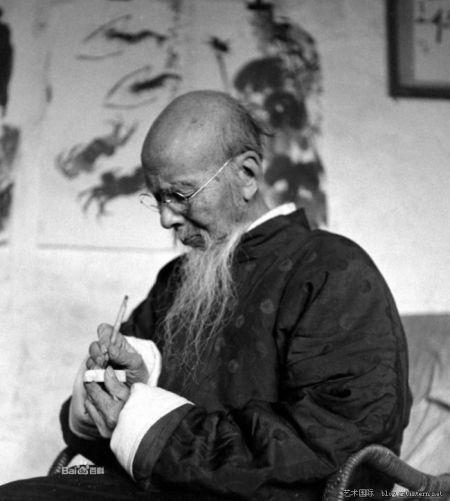 The Chinese seal artist Qi Baishi was born in Xiangtan, Hunan on January 1, 1864. He became a carpenter at the age of fourteen, and learned to paint on his own. His seal carving is very individualistic, reflecting his earlier woodworking experience with axe and chisel. Qi Baishi is best known in the western world for his painting and calligraphy though he considered his seal carving his best work. He was elected President of the Association of Chinese Artists in 1953. He died at the age of 93 in Beijing on September 16, 1957.

Qi Baishi wrote in his journal,

“Vulgar people often describe their seal engraving as something derived from Qin and Han seals. In fact, they have not learned anything. In my own seals, I am often afraid of looking like Qin and Han … in my seal cutting, when young I made a careful study of the calligraphy of the ancients, then looked for the inner logic of engraving characters. I did not spoil my work by ‘imitation,’ ‘artificial elaboration,’ or ‘over-polishing,’ considering these a waste of energy. When men praised my seals, I smiled; when they ran them down, I smiled … when I cut seals, I am not bound by old rules and so modern philistines think I follow no tradition. But I pity this generation’s stupidity, for they do not seem to realize that the Qin and Han artists were human and so are we, and we may have our unique qualities too which the men of old would admire too if they could see them? … such classical artists as Ching-teng, Hsueh-ko and Ta-ti-tzu dared to make bold strokes in their paintings, for which I admire them tremendously. My one regret is that I was not born three hundred years ago, for then I could have asked to grind ink or hold the paper for those gentleman, and if they would not have me I should have starved outside their doors rather than move away. How wonderful that would have been! I suppose future generations will admire our present artists just as much as we admire these men of old. What a pity that I will not be there to see it!”

The seals below are only a small sample of the thousands carved during the artist’s lifetime. Seals shown are not to scale.