The Chinese seal artist Wen Peng was born in Suzhou, Jiangsu Province. He was the eldest son of Wen Zhengming, one of the most famous calligrapher-painters of the Ming Dynasty.

A civil service official in both the Northern and Southern Ming courts, Wen Peng was a lecturer at the Imperial Academy both in Beijing and Nanjing. He originally wrote characters directly on ivory for the seal carver Li Wenfu to cut. Later, so the story goes, Wen Peng met an old man selling Qingtian Fengmen “Lamplight Jelly” stone being used by women for making jewelry. He realized that, as a soft stone, he could cut it himself and so have more control over the seal making process. He is said to have purchased all the old man’s stone and is now credited with being the first to use this stone for seal carving. From that point on he used stone exclusively to carve his own seals. His seals are characterized by square, bold lines in the style of the Han Dynasty. “It is said that after he finished cutting a seal, he would ask his servant to put it in a box and keep shaking it, so as to produce the antique effect of broken edges. Then, he would have the seals hardened by calcination for permanent keeping.” (Niu, p.67) Wen Peng also engraved many of the seals used by his father Wen Zhengming and his younger brother Wen Jia. He is credited with founding the first school of seal carving, the Sanqiao School, named after one of Wen Peng’s pen names. Another name used is the Wumen School, named for his birthplaace (Wuxian). His followers included: Qu Yuanyu, Chen Keyi, Li Liufang, Xu Zhonghe, and Gui Changshi. Because of Wen Peng’s fame, there have been a large number of forged seals ascribed to him. 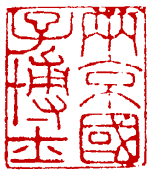 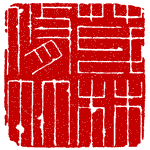 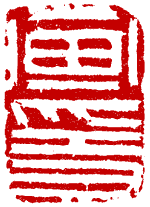