The Shifu—the word everyone uses for the concierge/attendant at the hall desk—says the office staff won’t be back until 1:30. I’m already well-familiar with this word shifu. In cantonese it is said sifu and is used when addressing a Chinese martial arts instructor. In America it is used in the sense of “teacher” but actually can be used for anyone with “skills.” The dictionary describes it as “master” though this was obviously not the intended meaning for the desk attendant. In mandarin Chinese the word laoshi is instead used for teachers and some authority figures where sifu would be used in cantonese.

I sling my bag over my shoulder again, go outside, and wander around the campus a bit until it’s time to go back to the office. There isn’t much paperwork to take care of—they need to see and make a copy of my passport. They show me how much I owe, which is more than I had expected—it seems November is longer than I thought and I had misscounted the number of days? It doesn’t matter that much since I am here now and have to pay whatever price they ask. They give me a photocopied map of the area around the campus with a few important places indicated, including the Bank of China’s nearby branch, which is just around the block from the college. I explain that I can’t pay until the next day when I will be able to go to the bank. They say they’ll trust me.

A Room of My Own

I’m shown to my room, number 328—which turns out to be the same room I occupied the night before, directly across the hall. They give me the room card, and leave me to my own devices. I have a double room all to myself. In the description on the internet the College’s website for the International Division lists three varieties of rooms available: a single room, a double shared room, and a double room (as I recall). I had budgeted for the double room assuming they might give me the highest priced option. I had been told that rooms were in high demand and that I may have to share a room, which I was willing to do as it would give me a built-in tour guide, so to speak. As it turns out I have the room to myself. My room is two doors down from the Shifu’s desk and the stairwell, and directly opposite from the administrative offices. 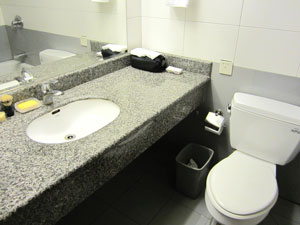 Just to the right inside the door is a bathroom which is almost identical with one in a cheap U.S. motel. There’s a bathtub with shower head, western style toilet, and sink. But no toilet paper in the holder next to the toilet. Luckily I had come prepared with extra packets of small tissue. Across from  the bathroom, to the left of the entry is a closet and next to this a nook with shelves underneath. Past this hall the bedroom widens out with a wardrobe, small chest of drawers, two single beds and two glass-top desks with chairs.

Both beds have a mattress and mattress cover, one bed has a sheet—which isn’t big enough to be tucked in on any side, and a blanket something like an opened sleeping bag which is a little shorter than the sheet, and a pillow. On the far end are large windows, one central window with an inside ledge and two flanking windows that open with screens. The night before I hadn’t noticed how they could open and am now glad they do.

After unpacking and settling in a little I rush downstairs to the basement student art shop to look around. I feel like a kid in a candy store, even though I know I’ll later find better places for art supplies. They have a section of seal stones for student practice but none of them look very good—not nearly as good as those used in class, so I decide to wait to buy some. I do buy a long piece of what may be stone in the same section. I don’t know what it is for and think I can ask someone later (as it turns out, I never do). It might make a good paperweight. The store is run by what I assume to be a student. He speaks some English though with a somewhat surly manner. I ask him for some paper to practice calligraphy and, after much looking through his piles of paper, finally chooses some for me and I buy twenty-five large sheets. I also get the best brush for practice (again his recommendation) and some ink. Also a black felt pad to put under the paper, used to absorb any excess ink. I want to practice calligraphy every morning as I did at home and, although I still don’t have a calligraphy model to use, I am getting closer to being able to do so. The total cost is $40.51. The next priority is getting some toilet paper.