After class I go to Kogo Art to see Zhao Hui. He had been a former student of Wang Gongyi and now worked at an art gallery. As a favor to her he had agreed to pay my university deposit, payable in advance, so I was on my way to repay him. From the university entrance I took a taxi to the gallery, on a road not too far away which wound through the hills to the south. After some introductions he showed me the current exhibit of contemporary art. Since his English was excellent we chatted for a while, then he insisted on accompanying me on a bus back to the university. After dropping me off he took another bus back to the gallery. Now, with his assistance, I had discovered how easy—and cheap—it was to use the bus system.

Later I walk to the stone market to buy ten qingtian seal stones for practice (about $4.70 each). On the way back I buy a newspaper, not to read but to lay laundry on to dry.

One of the other international students had some business cards with their name imprinted along with the college logo and address. In the early afternoon I go to the campus printing office to order my own student/business name cards ($9.51). 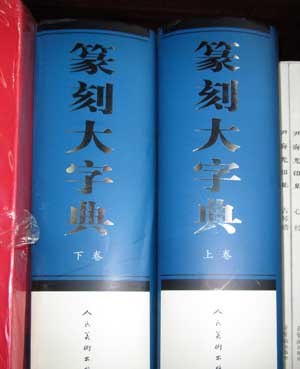 5:14 PM – I take a taxi from the bookstore back to the dormitory. I’m not sure how China became one of the most populous countries on earth the way they drive—it’s one constant game of chicken between cars, trucks, motorbikes, bicycles, and pedestrians.

Wang Gongyi’s friend recommended a restaurant near campus with wifi access so, after a long afternoon of walking, I’m hungry and ready to give it a try. The Mingtown restaurant is obviously going for the international look. The menu is all European and American food—they even have a hamburger on the menu.  Breakfast includes the choice of American, British, or Spanish versions. The British breakfast includes, among other things, tomato—which sounds unusual to me. They are playing American jazz in the background. I have dinner ($8.72) and use their wifi to email home.

9:00 PM – After dinner I walk to the Carrefour Department Store for a table lamp to put on my classroom desk ($31.55). My poor old eyes need more light.