Waking up in Hangzhou

I wake up between 4:00 and 5:00 AM Hangzhou time to the sound of dumpsters banging against the sides of the trucks that come to empty them each morning. I lay in bed for a while but can’t get back to sleep, so get up and do my morning exercises, then take a hot shower. The room and bathroom are the same as in any cheap motel in the U.S. but without any pictures on the wall. Clean with no frills. It feels like a luxury to take a shower, get cleaned up, and get into some fresh clothes. Jet lag doesn’t seem to have had much effect so far. Out the window on the ground below is a track enclosing an outdoor basketball court with a narrow road circling the track. I see that the buildings surrounding the track each have numbers on them up near the roof line. These numbers can only be seen from this inner area and aren’t visible from the main street I had entered from the night before on the other side of the building. Apartments are visible beyond the nearby buildings, where balconies are hung with clothes being dried. The track is wet and would be off and on wet for the next week from scattered light rain showers. I gather up my things and go back out to the desk and am told, to my surprise, that the offices are just across the hall from my room. I later learn that this building is exclusively for the use of foreign students and that these foreign students have their own office staff in the same building. 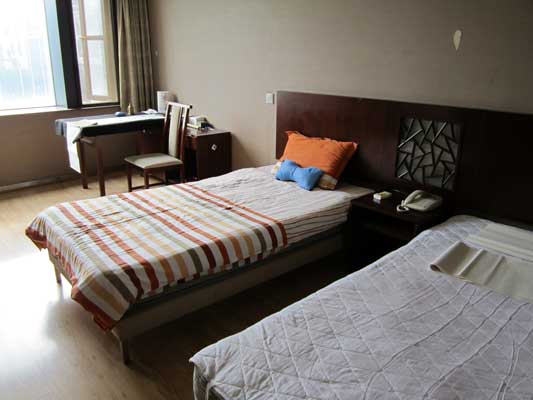 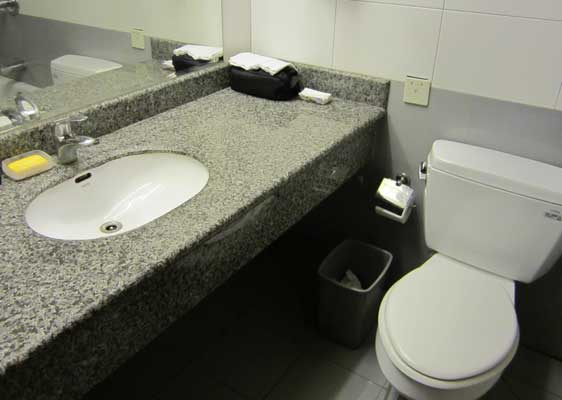 The office doesn’t open until later and while I stand by the desk wondering what to do next a girl comes down the hall and seeing me, says “hello” in English. I say “hi” and ask if she speaks English. She says she speaks a little and so I explain my situation. She asks if I’ve had breakfast and when I say no, she offers to show me where the cafeteria is. While we walk downstairs to the basement and down the hall I learn that she is Japanese and in my seal-carving class. Her name is Kitayama Satoka but here in China she goes by the name Suishin.The dining hall is a low dimly-lit room in the basement with a cafeteria line and kitchen at the far end. You just point at any of the open bins of food that look appealing and they put heaping piles of your choice onto military-style divided metal trays. Most students use prepaid cards but I am able to pay with cash as well. A huge bucket holds plastic chopsticks and a bin has spoons. At the far end are standing glass-covered refrigerators with canned and bottled drinks. I pick out a bottle of what is obviously orange juice to go along with my food, pay a total of $1.26, and follow her to a table where I meet her friend Kenichi Nakamura who goes by “Ken,” a boy also from Japan. He is in the Chinese language program and doesn’t take art classes.He is tired from staying up late doing homework. Our conversation that morning consists mostly of me asking questions with answers given in a mix of Japanese, Chinese, and English. She says our class starts at 8:30 and goes till 12:00 noon Monday through Friday. I explain that I have to go to the office and do paperwork and get settled in, so probably won’t be in class until the next day. That morning, and every morning in the cafeteria, is a game of guessing what it is you’re eating and I can see that the two of them are playing the game too. I took a plain steamed bun, plain white rice, and some kind of vegetable mixture. The large soft bun also has some kind of vegetables at its center. The rice comes from a huge pan where they take a spatula to cut off huge blocks to put on your tray. The vegetable mix doesn’t look very appetizing but tastes very good. In fact, everything I eat in this cafeteria later is surprisingly good for how it looks. It is here I realize that what most Chinese-American restaurants in the U.S. serve is nothing more than low-end cafeteria food in China. My new acquaintances go off to class while I stay to finish my breakfast. I can’t see any napkins anywhere and learn later that everyone brings their own—I later find this to be true in most of the places I eat. The orange juice is good, but tastes like a different variety than I’m used to and there are bits of orange at the bottom of the bottle. 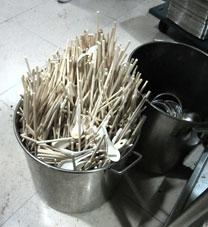 Just outside the cafeteria door is a metal table and trash cans where everything is dumped on the way out with a huge metal pot for used chopsticks.

I go back upstairs and the night service person explains to the office staff how I had showed up the night before. They are expecting me and, after a brief conversation between the concierge, for lack of a better word, and the office staff I’m taken next door where I am to pay my fees. I explain that I have not yet had time to go to a bank. They say I can pay later and that someone from the office will take me to my classroom.