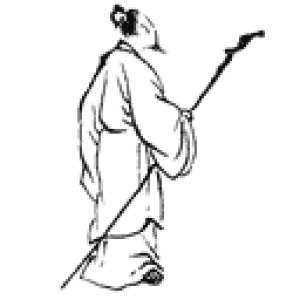 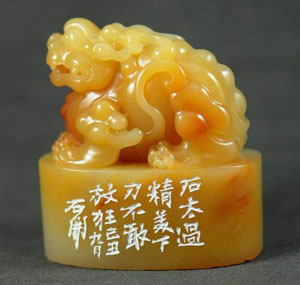 Seal artists often write on the sides of their seals (in Chinese called 邊款 biankuan). This may include:

In fact, anything can go on the sides of the seal, including pictures. Unlike the seal impression itself, the carving on the sides of the stone don’t need to be reversed and are simply examples of the carver’s calligraphic skill. Very decorative styles are sometimes used and often more than one style of calligraphy will be found on the same seal. The design of these side inscriptions follow the same principles used in the creation of a calligraphic work of art on paper or silk.

Although side inscriptions may use any style of calligraphy, the majority are carved in a variation of regular script that evolved as a result of the use of knife and stone rather than brush and paper. How-to books on seal carving often describe and illustrate the basic strokes used in this style.

The method used to learn cutting side inscriptions is the same as that used in most Chinese art forms—by copying. Many printed collections of seals include, along with the stamped impression of the seal surface, rubbings from the side inscriptions. At first your teacher will choose a good example for you to copy from but as you progress you can choose your own side inscriptions to copy according to your interests.

When cutting the characters on the side of the stone some artists hold the stone in place with one hand and turn the blade with the other hand as needed for each character. Other artists turn the stone as they cut with the knife hand held in a steady position, always cutting in the same direction. Both methods can be combined—try them both and see what works best for you. For decorative effect some characters can be left raised with the background cut out around them rather than the usual method of cutting the characters directly into the stone.

Traditionally side inscriptions begin on the left side of the stone (as it is positioned when stamped). This way, if you put the thumb of your right hand on the side with the inscription and your pointer finger on the top, you’ll always know which way is up when you stamp the seal onto your artwork. If you have a lot to write and you fill the left side of your stone you can continue from right to left, as you would in writing Chinese in the traditional way, continuing around the stone from the left, or west side if you have the stone set down on paper as if you were stamping it, to the top/north, then the right/east side and, if needed, onto the bottom/south side. If this still isn’t enough room for all you have to write you can continue on the flat top of the seal stone. Occasionally you will see writing on the top of the seal and not on the sides, though this is unusual. Irregularly shaped stones may have inscriptions cut into any available surface, though they also usually begin on the left side.