7:00 AM – Since I’ve been giving tours at the Portland Chinese garden for several years as a volunteer, one of my goals in China is to visit our sister city of Suzhou and visit the gardens there so I get up early but the dining halls are closed so no breakfast for me today.

7:50 AM – At the station I buy a bus ticket to Suzhou ($11.41). A Chinese woman in line at the ticket window of the bus station offers, in English, to help me get my ticket. She is also going to Suzhou. There are seat belts on the bus but I notice that no one uses them. The bus ride takes a little over two hours. Above the driver a TV shows soap operas, music video, and a docudrama about Deng Xiaoping in France as a young man. I see a lot of canals on the ride between Hangzhou and Suzhou. On the bus I buy a map of Suzhou from a vendor for 79 cents. 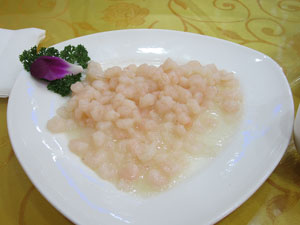 I take a taxi from the bus station to the Humble Administrator’s Garden ($1.58). After a short ride the woman cab driver lets me out near a large intersection and points across the street. Since I’m hungry from not having breakfast I look around for a restaurant where I can get some lunch before going to the garden. I go into a restaurant across the street from the entrance lane to the garden where the waitress seems to recommend the fish swimming in a tank ($10.68) but instead she brings: 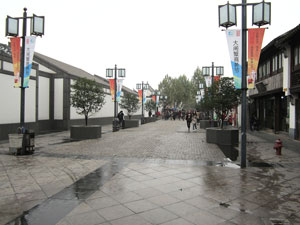 There’s a long entrance lane leading to the garden lined with tourist shops and, at the far end, is the garden entrance ($7.92 entrance fee). Although it is called the Humble Administrator’s Garden there is nothing humble about it, it is more of a park than a garden and is full of people. 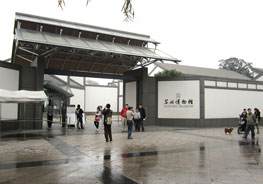 After I leave the garden I walk a few doors down the lane to the Suzhou Museum built by I.M. Pei and buy souvenirs in their gift shop ($137.53):

Going out a side door of the museum I come to an old house which looks like it must have been used by a theatrical family. Back out in the lane I stop in to a shop that sells teaware and buy an yixing clay yin/yang incense burner for about $5.54 which I intend to give to my boss when I get home but this turns out to be one of the few things that breaks during transit. I am disappointed not to find any teapots or cups that I like. I was hoping to find something with a dramatic design but only find the usual run-of-the-mill overdecorated touristy items. From another shop I buy a Buddhist mouse pad, a “Love Story” photo album for my daughter and a KFC/Mao note pad ($11.89). At another t-shirt shop I get two strange “Santa” t-shirts ($26.95). At another shop I buy two embroidered place mats ($7.92) and three tote bags ($23.78). At another shop I buy a fish purse/bag with a drawstring top and an [ikat] design for my daughter ($5.54). By now I’m starting to get concerned that I have a lot of gifts for my daughter, who is easy to buy for, and need to think more specifically about everyone else at home. 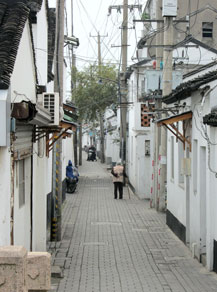 Now, with my arms full of shopping bags, I walk down the street outside the garden in the general direction of the bus station, following a canal. At the next major intersection I ask two old women where to get a taxi—my arms are getting tired from carrying so much—but they tell me to walk to the bus station instead. They give me directions and I thank them and head off in the direction indicated, with them watching me from a distance and waving me on. I cross a large canal and see the bus station in the distance and get back to the station just in time to get a ticket ten minutes before departure.

4:30 PM – I leave Suzhou for the two-hour return bus trip to Hangzhou ($11.41). It’s an uncomfortable two-hour ride as the tea I drank at lunch is catching up with me and I need a bathroom.

At the end of the day I feel a real sense of accomplishment in having made it to Suzhou and back on my own. In Hangzhou there are showers with a temperature of 64 degrees F.